The Plastics Industry Should Be Looking to the Future

The lack of waste stream and recycling infrastructure necessary to properly dispose of traditional plastics is polluting our oceans, threatening our wildlife, and harming our planet. As the evidence of such destruction continues to permeate the public consciousness, consumers increasingly desire alternative products and solutions.

In August 2018, we conducted a poll which found that Millennials from all backgrounds and demographic segments are supportive of bio-based materials. They are even willing to pay more for them. In fact, Millennials, the largest American generation with the greatest spending power, feel the most guilt about their plastics use compared to other behaviors that may impact the environment.

We formed the Plant Based Products Council (PBPC) to seek out and facilitate holistic solutions to the plastics crisis by bringing together businesses, governments, and nonprofits who want a cleaner environment. Bio-based products and materials offer a viable path toward a more sustainable global economy.

This is why it’s so surprising to see the Wall Street Journal’s report that the plastics industry is “fighting back.” Despite an alarming lack of evidence or specificity, these groups claim that bio-based plastic alternatives do more harm to the environment than traditional plastics. One trade group for American chemical companies and plastics manufacturers went so far as to claim that polystyrene (foam) containers are better for the environment than paper- or corn-based alternatives because they use “less energy and water” due to the fact that they weigh less. 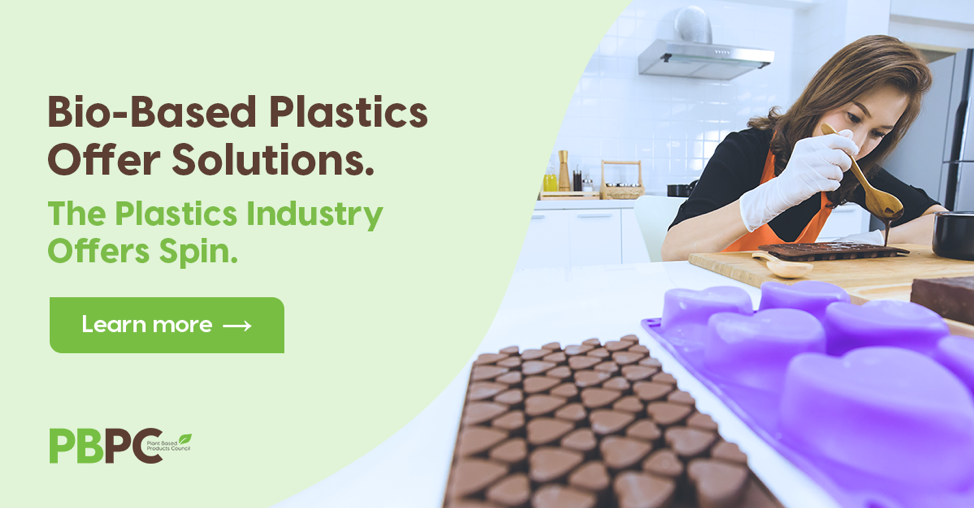 This is a carefully phrased argument crafted to obscure the fact that, ultimately, it doesn’t make sense. Consumers want options based on factual information, so it’s best to be clear and truthful about the potential impacts of every choice. Cherry-picking arguments isn’t helpful to the goal we should all be sharing: A healthy, clean environment.

When considering a product or material’s environmental footprint, it is critical to take a wide view across a broad range of factors, some of which include:

Water: Producers of bio-based products are also constantly working to reduce water use. Manufacturers can recycle the same water multiple times before returning it safely to the environment. For instance, the typical pulp and paper mill in the U.S. reuses the water involved in production 10 times and about 88 percent of the water used is discharged back to its source after meeting the most stringent water quality and treatment standards. Meanwhile, many fossil fuel-based plastics are made from natural gas, which is extracted through fracking, a controversial and water-intensive process.

End-of-life: Plastic recycling rates are far lower than plant-based materials. About 79 percent of all plastic ever produced is currently in a landfill or the environment. Compare that to most bio-based plastics and packaging, which more often than not are either biodegradable or compostable. Biodegradable bio-based products can be broken down over time by natural forces. Composting means they can be broken down using a controlled balance of heat, moisture, nutrients, and oxygen in an appropriate composting facility by the same microorganisms that break down other plant and food stuffs.

We recognize there is more work to be done to advance composting activity in the United States. We’d like to see a greater investment in composting infrastructure combined with the widespread adoption of compostable, bio-based products and packaging materials. This would yield widespread economic and environmental benefits in the form of reduced landfill volumes, less plastic pollution, decreased greenhouse gas emissions, and increased job creation.

We’re also not claiming that bio-based plastic alternatives are the Holy Grail that will single-handedly solve our plastics crisis. In fact, we believe a role will remain for petroleum-based plastics in our economy, although we hope in reduced quantities from today. That’s why we also support increased recycling of petrochemical plastics, to ensure these products have end-of-life value and are less likely to end up as pollutants.

Our economy does best when consumers are able to make choices that align with their needs and their values. We hope the plastics industry will recognize that plant-based products are one possible solution in that effort.

We also hope that publications like the Wall Street Journal will provide increasing and even-handed coverage of the impressive bio-based industry, which offers innovative solutions to some of our planet’s most intractable problems.