Can an enterprising group of farmers disrupt the global market for petroleum-based plastics, with a new and sustainable innovation?

The Iowa Corn Promotion Board is developing a renewable precursor chemical that can replace petroleum in packaging and a range of other plastic products. And this renewable plastic is still recyclable.

Naturally, their new, renewable chemical is sourced from field corn.

For the uninitiated, sweet corn is the corn eaten off the cob or as kernels. Field corn is used in 4,000 other products, such as makeup, toothpaste,cereal, livestock feed, ethanol, and the production of plant-based chemicals.

Where Farmers Lead the Way

“ICGA has over 7,000 members, in a state where over 95% of the farms are family-owned and operated,” said Alex Buck, Industrial Innovation Manager for the two groups.

“Farmers set our goals. What is it going to take before we are ready? How do we meet our milestones? It’s ultimately the farmers that decide when we’re ready to go out in the world,” said Alex.

Those same farmers have tasked Alex, a scientist with a PhD in organic chemistry, in finding new uses for corn.

“The Promotion Board’s mission is to find ways to help support Iowa corn growers, and one of the best ways to do that is to find new uses for corn,” said Alex.

One fact stood out to the Iowa Corn Promotion Board: 99% of today’s plastics come from non-renewable fossil fuels. Meanwhile, about 1% of plastics are created from renewable, plant-based sources, an incredible opportunity and a market that Iowa corn farmers could help revolutionize.

“That’s why we’re leading the charge to find new uses for corn in new plastics and new chemicals,” said Alex.

A Skunk Works for Renewable Chemistry

Like the original Skunk Works, the Iowa Corn Promotion Board is also taking on competitors with a significant head start in research and production, as traditional plastics have been part of the global economy for many decades. Thankfully, the research isn’t done out of a circus tent. Still, compared to their traditional plastic competitors, ICPB is less well-known and draws from an unconventional funding stream.

“When a farmer sells his or her grain in the state of Iowa, the Promotion Board collects one penny per bushel. That equates to about $20 million a year for the check-off program,” explained Alex.

ICPB’s plant-based chemical research program receives a portion of the overall budget, again making them a serious underdog compared to the much older and well-funded petroleum industry.

One thing that could help plant-based chemistry catch up to the petroleum-based chemical industry? Tax incentives.

“New molecules are hard and expensive to make until they get their foothold. And so, some of these new plant-based processes can benefit from tax incentives and other incentives from policymakers,” explained Alex.

He pointed to the Iowa state biochemical tax credit as a model to incentivize bio-based chemicals.

“The state of Iowa offers a 5 cent per pound production tax credit, or an investment credit on new volumes of chemicals,” said Alex. “And that’s feedstock agnostic. It doesn’t matter where it comes from or if it’s corn or soy or animal by-product.”

Iowa was one of the first states in the nation to offer such a credit. A federal program could be modeled on these successful state programs, as well.

“A biochemical tax credit lowers the market risk, lowers the barriers to entry of new chemicals and new molecules, and serves as a powerful incentive,” added Alex.

In seeking their target molecule, the Iowa Corn Promotion Board evaluated over one hundred potential opportunities in the chemical space.

Finding the right chemical out of all those possibilities required rigorous research in the scientific realm and the manufacturing realm.

“We looked at the market pull and the market dynamics of plastic and chemical technology. We had to know where the industry was headed because we don’t have the dollars to invest in something the industry might not want,” said Alex.

During the research process, which began a few years ago, the corporations and potential downstream customers that Alex and the Iowa Corn research team spoke with were loud and clear.

“They said, ‘we are interested in a plant-based or bio-based plastic that can be recycled,’” said Alex.

After extensive research on new molecules, ICPB landed on a corn-based monoethylene glycol or MEG.

“Our MEG is a plant-based version of what petroleum already makes. Today, petroleum-based MEG is one of the largest demand chemicals by volume. It goes into polyester clothes, antifreeze, and soda and water bottles,” said Alex.

And corn-based MEG can be substituted in any of those products.

A Tech Incubator by Farmers

“We look at ourselves as a technology incubator, driving innovation,” said Alex.

But farmers remain top of mind throughout the research process, and, in fact, they own the technology patents.

“If we want to keep the farmers front of mind and ensure that the technology is for farmers, by farmers, and owned by farmers, we need to be sure we own the patent portfolio,” explained Alex.

In fact, the Promotion Board has already filed for 13 families of patents in MEG. Those patents will allow downstream manufacturers and companies to invest in MEG. 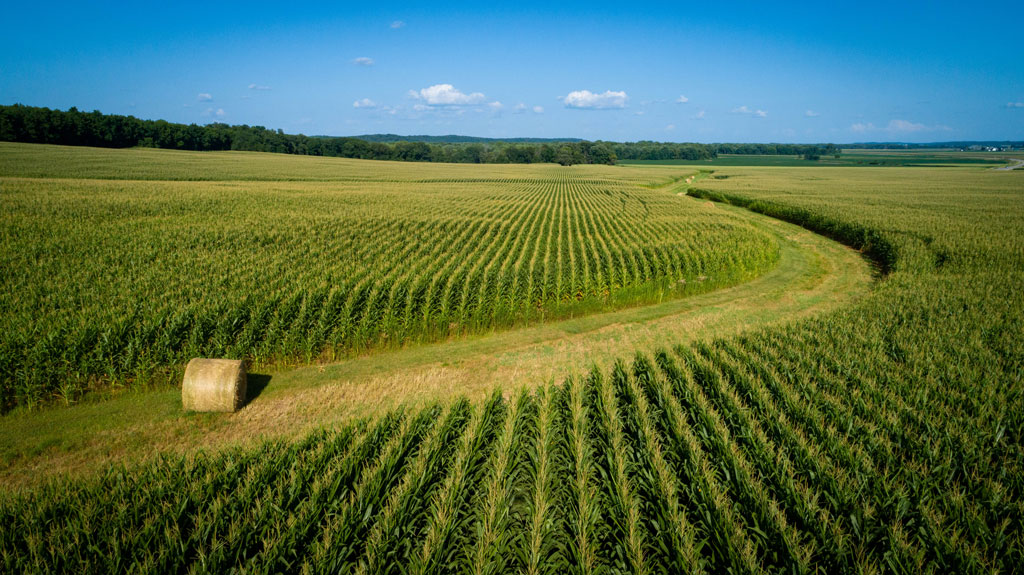 The year-over-year growth of MEG equates about a hundred million bushels of corn for our farmers.

Once the MEG technology is ready for market, the Promotion Board will take it to the broader manufacturing industry, where companies can purchase or license the plant-based technology, build new manufacturing plants (or modify existing plants), and take the new product to market.

“As consumers demand more and more of these plant-based, but also recyclable, plastics, we see the demand for plant-based MEG growing, too. The year-over-year growth of MEG equates about a hundred million bushels of corn for our farmers,” he added.

While that’s a drop in the bucket compared to Iowa’s annual production, which clocks in at over 112 billion pounds annually, Iowa’s corn farmers recognize the need to help address our environmental challenges.

The Iowa Corn team is also asked to address the sustainability of their farmers.

“Our farmers are driving up sustainability and production while also driving down inputs in their farming practices,” explains Alex. “We produce eight times more corn on about the same number of acres of land as we did in 1900.”

Farm families care deeply about the land and are committed to making soil health and water quality a top priority. Farmers use a variety of conservation practices to safeguard these natural resources. .

Some farms have been in production for a hundred years or more, and the farm families work hard to ensure that they will be there and be successful for the next generation, while still providing everything a consumer needs them to provide.

Join our growing group of plant-based leaders working toward a more sustainable economy. Learn more about the benefits of PBPC membership.